“Farm Values: Civic Agriculture at the Crossroads” focuses on six farms in six towns in north-central Massachusetts. Going from northwest to southeast, they are: Warwick, Orange, Athol, Petersham, Barre, and Hardwick. 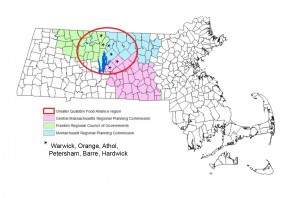 These towns are at the geographic center of Mount Grace Land Conservation Trust’s 23-town service region, which spans two counties (Franklin and Worcester) and three regional planning authorities (Franklin Regional Council of Governments for Warwick and Orange, shown in green on the map; Montachusett Regional Planning Commission for Athol and Petersham, in blue; and Central Massachusetts Regional Planning Commission for Barre and Hardwick, in pink).

Imagining the six towns as a mini-region is helping the land trust and its partners to think about better ways to develop collaborative projects that cross political and administrative boundaries.

In addition to being a kind of geographic crossroads for regional thinking and planning around land use and food systems, the six towns are at the crossroads in other ways.

They lie between the (urban) eastern and (rural) western halves of the state, a geographic and conceptual division with a long history of tension and debate surrounding food and water supply, wealth disparities, and other resource issues.

And with a mix of small rural communities and somewhat larger mill towns, this mini-region is also at the crossroads of the state’s agricultural, industrial, and postindustrial sectors. This gives the “Farm Values” project an opportunity to look at the intersection of those economies over time and to think about the role played by food production in all of them.