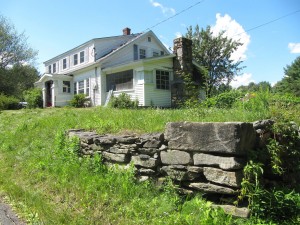 Where land is a valuable commodity and food is produced on an industrial scale that keeps prices low, young farmers like Emily Anderson and Tyson Neukirch find themselves caught in an insoluble puzzle: growing and selling food on a small scale may simply not be profitable enough to pay the mortgage on an expensive piece of farmland. This isn’t a new problem—the best farm soils in Massachusetts were spoken for even before the Revolution, when the population was already beginning to outstrip the available land. But as more people today come to realize the ecological, economic, and cultural benefits of locally- or regionally-oriented food systems, land trusts, town governments, and other allies are stepping in to help ensure the working future of agricultural landscapes and land access for the farmers of tomorrow.

The former King Farm in Petersham was established by the 1790s but has not been farmed in recent decades. Emily, a Petersham native, and Tyson, who grew up on a corn and soybean farm in Nebraska and now teaches beginning farmers at the Farm School in Athol, plan to practice what they describe as “diversified perennial agriculture” on their farm, combining pastured animals, managed forestry, fruit and nut trees, and other perennial and annual crops grown in ways that help regenerate rather than deplete the nutrients in the soil.

Each step of the way, they will be in communication with the state and local agencies that have helped protect the farmed and forested landscape. “It’s a very interesting multifaceted relationship to land stewardship practices,” in Tyson’s words—a contemporary experiment that approaches farmland as a collective resource as well as a saleable commodity.

Click here to read more about the past, present, and future of the King Farm.