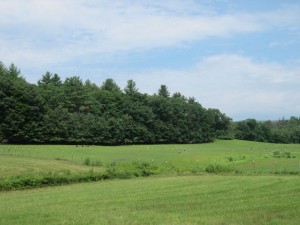 Local food is a hot topic right now, but fully local food systems—self-sufficient farmsteads and villages—seldom existed even in the colonial period. Farmers in central and western Massachusetts have always been part of larger networks of exchange and commerce, which expanded rapidly with industrial towns and cities in the 19th century.

“Upland” towns like Hardwick, with their ample pastures and hayfields, have been particularly important as sources of meat and other animal products. Many farmers tapped out their land’s fertility trying to keep up with growing competitive pressures as food production, too, became more industrialized and long-distance. But old farms like the two now owned by Stillman Quality Meats often continued to adapt. One of them, still known locally as “the Turkey Farm,” pastured thousands of free-range turkeys for holiday markets each year in the decades after World War II.

Kate Stillman, part of an area farming family that provides year-round food to its central and eastern Massachusetts customers, continues to build her meat business by selling at urban farmers markets and through its CSA (Community Supported Agriculture, a way for farmers to sell shares in their products directly to subscribers). Balancing supply, demand, transportation, labor, and the productivity of her land is a continual juggling act for younger farmers like Kate, just as it was for her 19th century predecessors.

Click here for a longer piece about Stillman Quality Meats and here for a photo gallery from the farm.